Skip to the content
Tapes are a good complement to other therapies. Be it for pain relief, to improve movement patterns or for muscle relaxation.
In 2010, when Italian soccer player Mario Balotelli tore off his shirt after scoring in the semifinals, many spectators stared at the three turquoise stripes on his back and wondered, “What’s that about?”
Eleven years later, it’s hard to imagine treating athletes without the tapes. They are not a miracle cure for pain – but they often help surprisingly well in practice. Unfortunately, these “pieces of the puzzle” often come up short in the overall treatment program.

Initially, the colorful adhesive tapes developed by the Japanese Kenzo Kaze in 1979 were considered pure placebos. In the meantime, however, some – albeit small – studies have shown that, for example, muscle strength can increase during taping and that taping improves body awareness.
What happens on or in certain areas of the body, such as the back, the brain generally perceives much worse than, for example, the sensitive fingertips. Taping improves body awareness for the areas where the tapes are stuck. They direct the attention there more, the “networking” with the brain improves and this leads to better control of movement sequences.
Therefore, poorly trained athletes or people with poor body control often benefit more from taping than competitive athletes. For the poorly trained, the muscles are not “controlled ” as well by the brain. The tape then provides additional information to the brain.

Another area of application is acute injuries such as supination trauma (twisting) of the ankle. This, as with any trauma, worsens positional control. In this case, taping can also help to regain “awareness” of the position of the joint. However, taping is often worthwhile even after a previous trauma or a torn ligament.
In addition, the swelling and bruising after supination trauma disappear much faster thanks to a lymphtape. In general, joints with high degrees of freedom, such as the shoulder and knee, which are stabilized mainly by muscles and tendons, benefit more from taping.

Overuse injuries such as “runners leg” or “jumpers knee” also often respond well to taping. The adhesive tapes with the wave-like applied adhesive film can shorten the pain and the recovery time here.
Various studies have also been able to show an increase in strength, speed, power and a shortening of recovery after training in the anaerobic range. The tapes stimulate the skin receptors and through them probably more motor units are recruited in the muscle.
However, their placebo effect should certainly not be underestimated either – but why not take advantage of it? 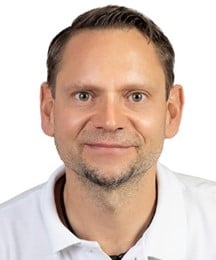