2PEAK uses the increasingly popular critical power method to set training zones and evaluate the strengths and weaknesses of an athlete. But what is critical power?  Here we simply explain this complex training statistic and how it is utilized in 2PEAK.

What is Critical Power?

The most simple definition for critical power is:

Critical Power – The power output, or the intensity of exercise, that can be sustained for a period without fatigue. Or the tolerable duration of high intensity exercise.

Critical Power, also known as critical speed in running, indicates a maximum sustainable training intensity over an extended period of time. There is also a known amount of work you can do above this intensity before reaching complete exhaustion, known commonly as W´

It is easiest to look at this graphically: 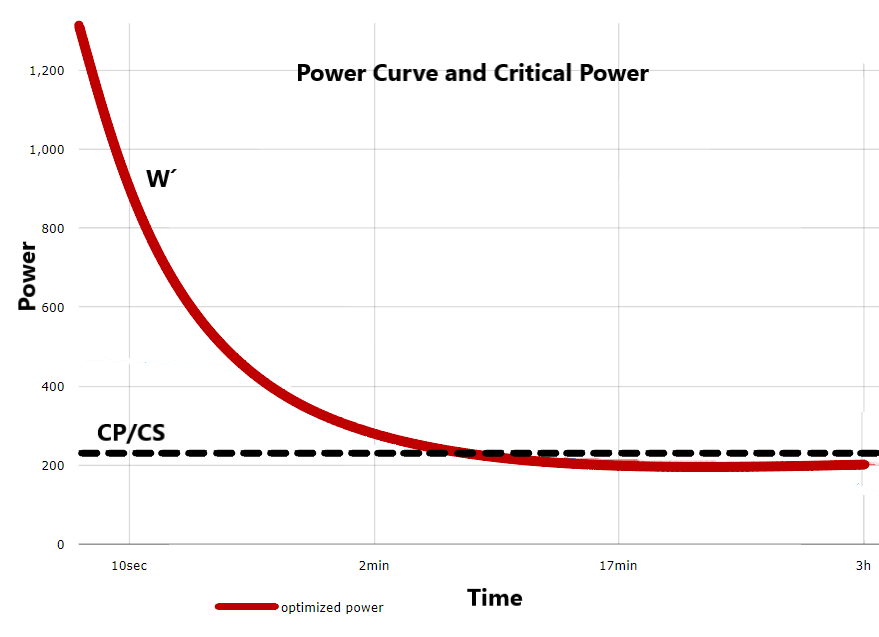 The optimized power is mathematically determined based on how much power an athlete can produce for different time periods. As one might expect, this produces a non linear  hyperbolic relationship. In other words, you can produce a lot of power for a short time and it falls quickly and flattens out over longer time frames. An athlete can produce a lot of power for 10 seconds. The amount of power you can produce falls rapidly up to two or three minutes. It continues to fall at a much slower rate at the high end aerobic time frame of and finally really flattens out on the right end of the graph.

The horizontal asymptote of this curve, or the point where it flattens out is the Critical power. The curve above the critical power line represents how long you can maintain a specific power output above critical power. To see the specifics of how this is calculated mathematically, as well as other biomechanical implications of critical power, you can read this article. Basically Critical power is based on theory and relates closely, but not exactly, to the metabolic energy systems

You can see the curve changes when your body moves from one energy system to another. These systems are constantly working together. Your individual power output limit within each system is important in determining critical power. 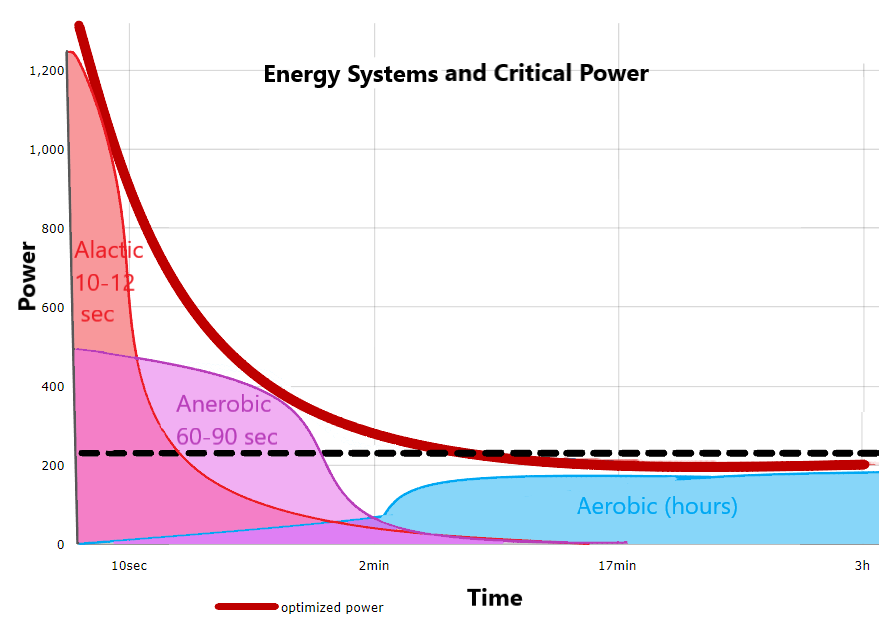 The long term system produces energy by burning fats and carbohydrates through aerobic (with oxygen) pathways. This system is dominant at lower intensities and efforts lasting longer than 2 to 3 minutes. Relative to the other systems it is slow but can be maintained for much longer.

This system burns glycogen without the intervention of oxygen. This process is very fast, which makes it especially useful for short efforts. Cyclists rely on this for surges up short climbs or runners in a 400 meter all out sprint. Working in this system results in an accumulation of lactic acid within the muscles. The Anaerobic system is fully exhausted within 60 to 120 seconds.

This is also known as the creatine phosphate system or sprint system. This form of energy is immediately available because it is stored in the muscles. It allows you to release a lot of power very quickly. Usually within 10-12 seconds this energy system is empty and you will see a clear decrease in power. It is especially important during sprints.

How it comes together

Energy systems don’t function independently. During exercise, they all are working simultaneously to different degrees, depending on the energy demands placed on the body. Endurance athletes use the aerobic system most, but they also use immediate and short term systems during high intensity efforts(intervals, surges in races, sprints). A balanced training plan like the ones created by 2PEAK has efforts in all systems. We can use your training data from within each of these systems to produce your optimized power and determine critical power.

Like most things in sports, there are significant differences between individuals. Although there is a relation from the power you are able to produce in each system, some athletes function abnormally better or worse in one or another system. You might be an excellent sprinter or you might be an aerobic machine. The only way to know for sure is to look at all of the data together and find critical power.

To look at your critical power, go to your 2PEAK statistics and click the critical power chart. If you do not have a 2PEAK account you can create a free 21 day trial and when you connect your or Garmin or Strava account, we can pull your historical data and create an optimized power curve for you. 2PEAK determines a critical power or BPM for cycling. For running,your graph can be based on speed, BPM or power if you have a running power meter. Using the same concept without a power meter, 2PEAK determines your critical speed or BPM. “PEAK also has a tool for triatletes and swimmers that calculates critical swim speed. The critical power graph looks something like this, and you can zoom in and view individual sections as needed. 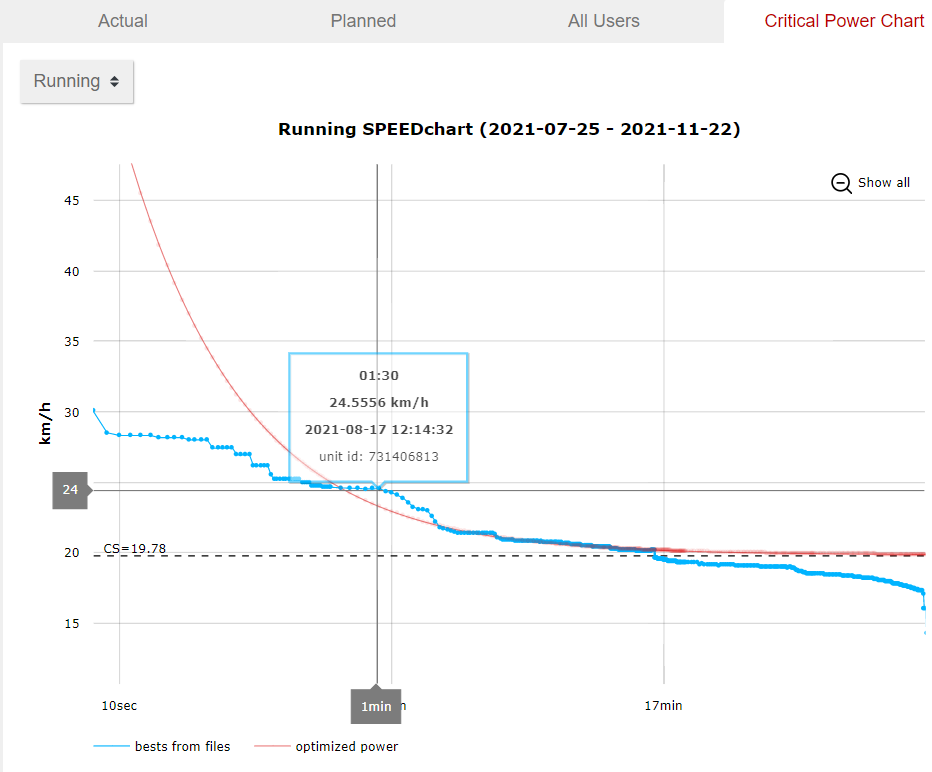 You can change how much of your recent training data the chart considers in a drop down menu. It is also possible to select multiple sports like running or cycling. This chart will only be generated for cycling if you have at least 15 files with power uploaded in the last 90 days.