Dr. Umberto Emanuele and Jachen Denoth from ETH Zurich published two papers in 2011 that investigate the role of cadence in endurance performance. The researchers found that relatively well-trained road cyclists in flat terrain are optimized at 88 rpm (for maximum continuous aerobic performance at the anaerobic threshold). Furthermore, the authors were able to present for the first time scientific evidence that for the same athletes on the mountain (at a 7% incline), a cadence that is nine revolutions lower (79 rpm) is optimal to achieve the threshold performance there. This fits very well with the observation that every cyclist has already made: You always pedal slower on the mountain than on the flat. 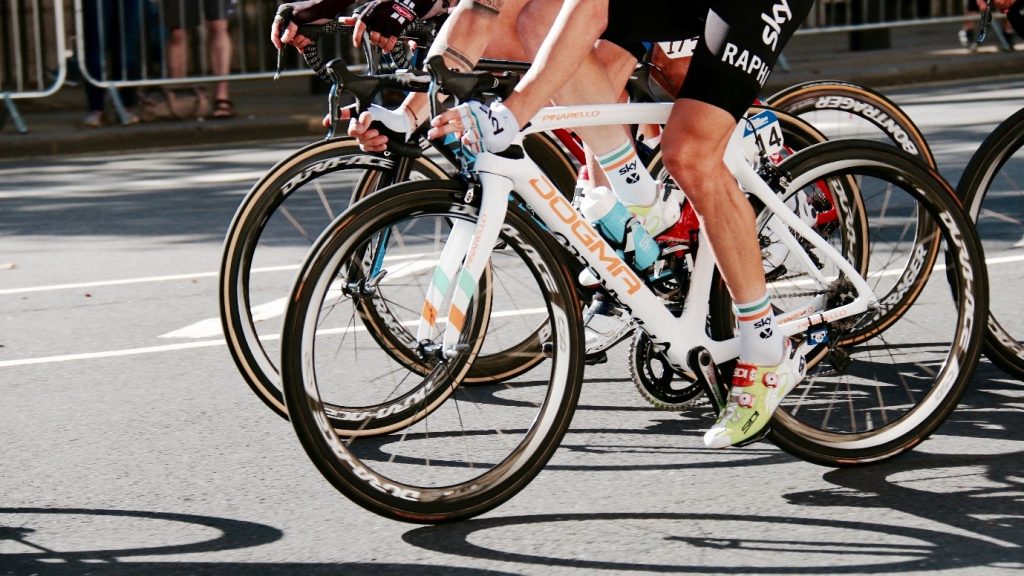 The researchers attribute this to the pulsating cycling speed. At really steep inclines everyone can observe this for themselves. At low cadences the pedaling stroke even becomes less smooth within one revolution. Pedaling too fast, however, reduces the efficiency because the amount of work the body has to do just to coordinate the pedaling movement increases. For uphill pedaling, this means that the speed spikes within one revolution must not become too great. On average, therefore, the cadence decreases compared to riding in the flat.

The researchers’ finding: If you exceed or fall below the optimum pedaling frequency by 40 percent, the power output drops by around 15 percent. And: optimum cadence and absolute power also correspond: for every 100 watts of additional power, the Zurich researchers determined an increase in the optimum cadence of 11 rpm, while other authors arrive at 8-13 rpm per 100 watts.

In practice, many cyclists observe that they can breathe better at low cadence. This impression is supported by some studies that show relatively low cadence of 60 rpm to be particularly economical in terms of oxygen demand. This is easy to understand when training with a powermeter. If a trained cyclist pedals significantly slower than normal below his or her continuous power limit – for example at slow-motion 50 rpm – the pulse rate drops. The muscle load, however, increases considerably and the muscles tire more quickly due to the greater effort required (power is the product of crank speed/revolution and force).

So there is a difference between a short time trial with (too) high gears and an epic mountain marathon. For long climbs or stage races it is advisable to avoid too heavy gears, even if your breathing is calmer for a short time. This is because, in addition to the increased fatigue of the muscles, there is another point: if you pedal particularly slowly and powerfully, the high-speed fibers of the muscles are increasingly addressed, which preferably use carbohydrates as fuel. However, carbohydrates are strictly limited, unlike fats, which are the main source of energy over long distances. A quick kick therefore conserves precious reserves and saves valuable “super fuel” for the finale of a race. Or just the last mountain.

As professional cyclists show, cadence also has individual components. Muscle composition, strength, fatigue and training condition have an effect on the cadence. Over time, an individual pedaling pattern is formed, but this can be influenced: A study shows that after a few weeks of targeted strength training the average cadence drops. But especially those who pedal faster than usual feel that this is not going perfectly. Muscle coordination sets limits to performance. You have to leave the feel-good zone during training to improve coordination at high cadences.

The mobilization of the muscles is a lengthy process that takes months, says professional trainer Benoit Nave, who supervises several world-class cyclists. Cadence training is unpopular because it feels inefficient to pedal too fast, but it is essential to become a better cyclist. This is especially true for beginners who have no experience with high cadences. By the way, it nicely points out the value of intuition and experience in cycling: It is not without reason that for generations, young cyclists have focused on learning high cadence.

On the other hand, too little power also limits the performance. Anyone who has to pedal uneconomically fast due to a lack of power in order to achieve the required performance will ride with poor efficiency. In addition, there are situations, especially in the mountains and off the tarmac, where even the lowest gear ratio is not sufficient and you are forced to ride with more power. A good cyclist therefore trains both: higher and lower frequencies than normal create the foundation for a wide speed range. The power required for low frequencies can also be strengthened without a bike with classic maximum strength training.

Whether the self-selected cadence is ideal for the current training situation can be tested using a self-test. This is especially exciting for time trial riders, who can set their own gears and speed, but also to understand which gear is the fastest to climb a mountain. A stopwatch is sufficient as “measuring technique”. But a power meter is ideal for analyzing your pedaling. It allows you to observe the relationship between cadence and power while you are riding and evaluate it afterwards.

Our research shows that well trained cyclists mostly have good intuition and choose a cadence close to the optimal cadence. Beginners show a wider range, with both too slow and too fast pedaling.

What is your advice to beginners, how fast should they pedal?

That depends on the situation. In competition, a beginner should not use the high rpm of the pros, because their absolute power is much lower and the optimal cadence is lower for low power than for high power. In training, however, it makes sense to also train higher cadence than the optimal cadence.

What influence does fatigue have on the cadence?

The more tired a rider is, the lower his or her optimal cadence is because the time required to activate the muscles increases.

What role does the length of the track play in the optimal cadence?

With increasing distance the performance and therefore the optimal cadence decreases.