These exercises will help cross-country skiers not only to go longer, but also smoother and faster in the short term.

How cross-country skiers can improve performance

Up on the skis, into the snow! The cross-country trail is freshly groomed in the winter landscape, the snow crystals glisten in the sun. It’s no wonder that most amateur cross-country skiers don’t waste their time warming up or stretching. It is often forgotten that adequate preparation helps amateur skiers in particular to cope with the athletic strain in the best possible way, especially when the load is high right from the start, as in a competition. It doesn’t take much at all to prepare your body for the specific demands of cross-country skiing. Simple warm-up exercises stimulate the blood circulation and bring the entire musculoskeletal system as well as the respiratory system to “operating temperature”. Then it’s a matter of mobilizing and slightly pre-stretching the muscles and joints specific to the sport. The following photo series shows the most important exercises for warming up and mobilizing before a sporting effort on cross-country skis. In order to minimize the risk of falls and injuries, it is recommended to perform all exercises at the side of the trail on solid ground. Madlaina Walther, snow sports instructor and cross-country skiing instructor, has selected the exercises for the picture series. The exercises are demonstrated by Moritz Reisser, cross-country coach at the Academic Sports Association Zurich ASVZ. 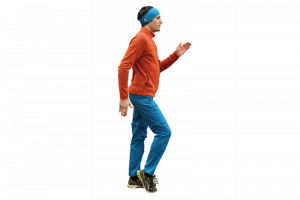 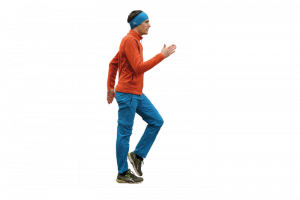 Run in place, alternately lifting the feet with the toes to the ground and then rolling back towards the heel. Arms actively support each other’s movement. 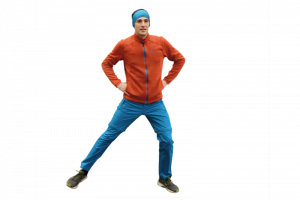 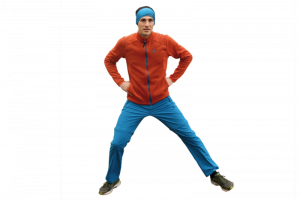 With legs nearly extended, jump to the side, perform about five repositioning steps in one direction, then back to the other side. Hands braced at sides, torso stable, upper body upright with proud posture. 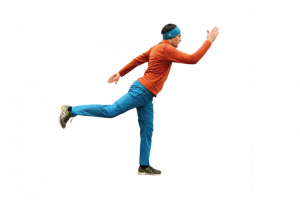 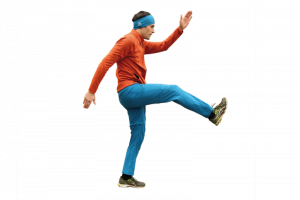 Standing in place, swing swing leg loosely back and forth, arms swinging with each other. If possible, do not bend the upper body. 3a) Complicating: In the final position, step onto the toes of the standing leg in front or behind. 3b) Simplifying: Use poles for balance. 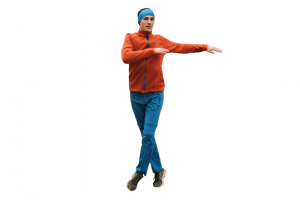 Cross feet laterally with hips rotated out. Arms support movement in opposite direction as “horizontal windshield wipers”. Keep hips as high as possible during movement. Change sides after about 20 meters. From a double-leg stance, lunge with one foot so that the back knee is just above the ground. Hands are supported at sides, upper body remains upright. Straighten body and lunge to the other side. Perform about ten lunges in a row. Standing on one leg, bend knee to the side at a 90-degree angle. From this position, perform ten small circles with the knee, first from outside to inside and then vice versa. Keep hips/upper body stable. 6b) Simplify: use stick for support. Lunge sideways, extend arms parallel to outstretched leg. At the same time, dissolve the lunge or put the legs together and perform a large circle in front of the face with arms extended until the starting position with lunge sideways is reached again. Place fingertips on shoulders and draw circles in the air with elbows, first forward, then backward. Then extend arms first up and then to the side, doing about ten circles each.

9. Rotate out over the head 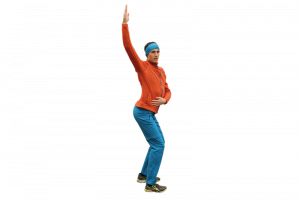 Stand hip-width apart and slightly bent at the knees, with the arm extended upward/backward. Now alternate stretching arms out to the side at head level and then back as far as you can. The gaze follows the hand. 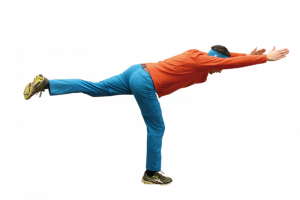 Stand on one leg, grasping the knee of the other leg with both hands. From this position, bring the swing leg back while extending the upper body horizontally forward to a stable standing balance. Hold position for five seconds and return to single-leg stance with knee held. Repeat exercise about five times per side.

11. Dynamic stretching of the hip extensors 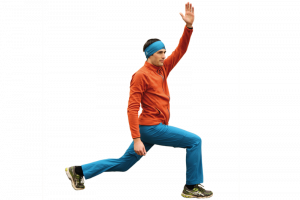 Perform a deep lunge. The rear lower leg points parallel to the floor, heel is lifted. Now gently rock into the stretch and increase the pull with the opposite arm. Upper body remains upright. Adjust stretch according to size of lunge.

12. Dynamic stretching of the calves Perform lunge with poles, pulling rear heel toward floor. In this position, slightly bounce the front knee, changing the angle of the rear calf. The back heel stays on the floor as much as possible.