How much should you drink during the race? When are carbohydrates in the drink useful? And which additives in the sports drink are useful or counterproductive?

As long as you’re training with clean fresh water, lack of fluids is not an issue. But when you’re running or cycling, proper hydration can be crucial: runners who get enough fluids are on average about four to five minutes faster in competition, and they suffer less from muscle cramps.

Fluid requirements vary greatly from individual to individual, ranging from four to eight deciliters per hour. To know it, it’s best to stand on the scale before and after training. (Test it beforehand by weighing yourself with, say, a 0.5-liter and a 1.5-liter bottle and see if it indicates that difference).

With a good hydration calculator, you can then determine your fluid requirements – which of course also depend on temperature and exertion.

Mouth rinsing or pouring water over your head can also help

The rule of thumb is to take a few small sips every ten to 15 minutes. Make a drinking schedule and remind yourself with a timer on your watch. While cycling, most people can tolerate larger amounts of liquids than while running. Simply rinsing your mouth with a carbohydrate drink can also make a difference. In hot weather, it can be better to pour a little water over your head than to drink a lot and overload your stomach and intestines. Amateurs in particular often tend to drink more than is necessary – and then run into the finish line heavier than they started.

The drink should be slightly “hypotonic,” meaning that it contains slightly fewer particles (for example, salt) than the blood. Such slightly hypotonic sports drinks are absorbed very quickly, in contrast to hypertonic ones, where absorption is delayed and which more often cause gastrointestinal problems.

When are carbohydrate drinks important?

When training in the basic endurance range, carbohydrates in the drink are unnecessary, the body can draw from the reserves. When exercising for more than 60 minutes (or longer than 45 minutes under competitive conditions), drinks with carbohydrates are recommended – with two exceptions: If you’re exercising to lose weight, it’s easier to do so without carbohydrates (= extra calories) in the drink. And if you want to train fat burning during fasting training, carbohydrates are counterproductive.

The carbohydrates in the drink can, for example, help you to perform at your best in the second half of a race. The maximum intake of carbohydrates is individually between 90 and 100 grams per hour. Initially, it does not matter whether the drink contains glucose or fructose. However, if the physical exertion lasts 150 minutes or longer, the combination of glucose and fructose makes sense, because the digestive tract can only absorb about 60 grams of glucose per hour.

As long as you don’t exercise more than five to eight hours a week, you can “make up” for the sodium lost with sweat with a balanced, healthy diet.

If the sweat loss is very high (more than one liter of sweat per hour from a duration of two hours or more), a salt supplement, for example via a sports drink or special salt tablets, is recommended. The easiest way to recognize a strong loss of salt is by the salt marks on your clothes.

If you like and can tolerate it, you can also “get in” more or less fluid, energy and micronutrients via solid food, for example with a piece of watermelon.

Performance starts to deteriorate after a weight loss (due to dehydration) of two to three percent of body weight. At first, the concentration usually decreases. From four to six percent dehydration, weakness increases, headaches join in, irritability rises and the feeling of thirst increases. An even greater loss of fluids is dangerous for most. The big exceptions are elite marathon runners who showed no decline in performance despite ten percent relative dehydration. 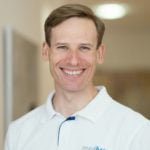