Mountain bikers would be slower without training on a road bike. For road cyclists, athletes often don’t consider enough the benefits of mountain biking for technical training. About differences and similarities of the disciplines. 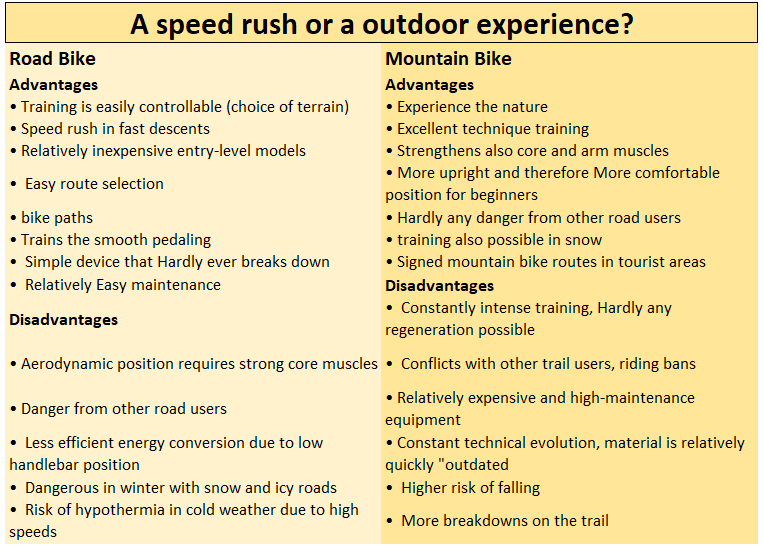 Every now and then, a top cyclist announces that he wants to try his hand at mountain biking. Matthieu van der Poel has successfully switched back and forth from elite mountain biking to road cycling in the World Tour. But road riders on mountain bikes are a not very common, and their success off-road is moderate. The reverse, on the other hand, is becoming more commonplace. Young elite mountain bikers are not afraid of road bikes and regularly race roads in the spring. This serves as race-like training for the bike season, which starts about two months later than the road season.

Road biking and mountain biking. Two worlds or one? In the following, commonalities and differences will be analyzed. The first thing to know is that the cyclist can learn from the mountain biker and vice versa. The most obvious difference for anyone who has tried both: Mountain biking is more power-intensive. The name “Mountain” says it all. Where there are mountains to be climbed, power is needed. If the ground is rough, you need even more power. The terrain makes the biggest difference to road biking. That’s why mountain bikers train regularly on the road. It allows for a steady rhythm. If “regenerative” is in the training plan, then you can hardly fulfill this requirement on the mountain bike. Or a fast training: German mountain bike world champion Sabine Spitz hangs out in the slipstream of her companion bike for 250 kilometers for speed training on her road bike. Most mountain bike athletes complete the preparation phase, usually beginning in December, on the road. “Only when there is snow do I take the mountain bike out of the cellar,” Späth tells us. However, snow rides are then an ideal riding technique training, which even the excellent technician Thomas Frischknecht does not do without. The actual technical training on the mountain bike does not start for the national team members until March. In the first training camp, the racing bike stays at home, the mountain bike is pummeled over rough terrain.

Only higher, not shorter

On the mountain bike you sit differently than on the road bike, more upright.  But hardly shorter. The top tubes of mountain bike frames are often even longer than those of road bikes for the same body size. However, you steer with shorter stems, which more or less makes up for the differences. Despite the two different geometries, the same thing happens to the muscles more or less. The slightly more upright riding position on the mountain bike only affects the hip flexor. The hip flexor ensures that the knee is lifted, i.e. it comes into play in the upward movement when the pedal is turned. The distance between its muscle attachments increases when sitting upright, allowing it to utilize a greater range of motion and thus work somewhat more efficiently. However, since the hip flexor is only used in the pulling phase, which only accounts for a small portion of the force development, the difference between the mountain bike and road bike positions remains negligible. We wanted to find out whether the road bike or mountain bike position is more efficient together with Andreas Gösele, a sports physician at the Basel Cross Clinic. Gösele, himself an avid cyclist, has built a bicycle ergometer together with Oskar Lehner, a bicycle builder from Basel, on which he can adopt the seating positions of road bikes and mountain bikes with millimeter and degree precision. Sandro Späth swings himself into the saddle as the test subject. Gösele transfers Späth’s seating positions on road bikes and mountain bikes, which he has optimized over the years, to his design. Späth rides at 100 watts in both the mountain bike and road bike positions, measured with an SRM crank. In the more upright, but not shorter, mountain bike position, the bike pro cranks at a heart rate just under 100 strokes per minute. Leaning on the racing handlebars, the rate increases slightly. When he gets all winded at the bottom of the arc, his heart must beat about five percent faster than in the mountain bike position. “The lower you sit bent forward, the worse it is for performance,” confirms Gösele.

The medical explanation: the large veins and arteries run over the thigh. Where the blood vessels flow into the torso, the sheath is bent and the blood can circulate less easily. The more forward leaning the cyclist sits, the more the blood flow is hindered. This can go so far that the road cyclist has numb feet because of a too low handlebar position. The foot is no longer supplied with sufficient blood. However, the conclusion that higher handlebars make you faster is wrong. Gösele: “The lower I sit, the more aerodynamic I am. The aerodynamic advantages outweigh the disadvantages to such an extent that you ride faster despite slightly lower efficiency. The loss of performance becomes marginal.”

Positive instead of negative

In mountain biking, aerodynamics play a secondary role. “In technically demanding races, we average under 20 kilometers per hour,” says Späth. Sitting more upright doesn’t put you at a disadvantage. On the contrary: you ride safer, have a better overview, and: “I have fewer back problems with higher handlebars,” says Späth. The lower you have to bend over the handlebars, the more holding work and thus strength is required from the torso. Power that would be better saved for the legs. Back pain is usually a sign that the torso muscles are slowly becoming weak. This is also why mountain bike racers are moving away from the extremely low handlebars that were in fashion just a few years ago. Negative stems, i.e. stems angled downwards, have almost disappeared in the professional field today. Nevertheless, the handlebar level is still below the saddle level. It has to be that way. Otherwise, the bikes would climb miserably, the center of gravity would be too far back, and the front wheel would lift off the ground more quickly.

For healthy athletes, however, this rule can be broken. Because the less the spine has to bend, the less the intervertebral discs are compressed. They can absorb shocks better when they reach the saddle. The strain on the hands is also reduced. A pressure-sensitive nerve canal runs between the ball of the thumb and the little finger. Too much pressure on this channel makes the fingers numb. Actually, this problem should occur primarily in road cycling, where more weight is placed on the hands. But practice is different. The less violent strokes and the possibility of changing grip positions on the road bike mitigate the problem. If your hands still fall asleep, you should buy gloves with good padding or install a soft handlebar tape – made of cork, for example. Professionals often wrap two layers of it around the handlebars so that they ride more comfortably. Mountain bikers have the advantage of screwing handlebar end grips onto their handlebars so that they can also regularly change position and reduce the pressure on the delicate area inside the hand.

Switching between the two disciplines is not only harmless, but actually a benefit.  The road cyclist can strengthen his upper body muscles on the mountain bike. In the terrain you work with the whole body, the arms have to cushion, pull, push, often you stand for technical passages in the pedals. Then you need body tension, and you can only build that up with strong core muscles. The second benefit is riding technique. With the bike you learn playfully to jump over obstacles, to react in fractions of a second, to steer correctly in critical situations, for example with slipping wheels. Conversely, the mountain biker on the road bike can train the smooth pedaling, refine the cornering technique at high speed, train speed resistance as well as basics. “I don’t know of any negative influences of one discipline on the other,” Gösele encourages. Finally, the mental component also comes into play. The fact that road pro Alexandre Moos quickly got dropped at the Swiss Bike Masters after a strong start and then dropped out didn’t really matter to him. Because with his excursions into the mountain bike world, he wants to achieve one thing above all: To get away from street life, to enjoy cycling. For him, who has already finished on the podium several times in the national bike racing series, mountain biking means a break from the season.

Perhaps this interests you too: Smooth Pedaling