Road racing shoes today are faster, more complicated and more expensive than ever. Nike created some controversy and a shoe company arms race in the running world with the Vaporfly 4% and now almost every shoe company has a comparable carbon racing shoe on the market. But what are the real differences between these shoes? We put some of the best to the test to get some hard data and real answers.

Author: T-Roy Brown is a long time endurance athlete with a background in triathlon and NCAA Division 1 distance running. working with the multisport training program 2PEAK and running.COACH. T-Roy ran a 2:22:07 Marathon in 2019 and a 1:06:40 half marathon in 2020

In 2017 innovation in marathon racing shoes created a huge leap in performance. Nike created the Vaporfly 4% claiming that this new shoe could increase running efficiency up to 4%. With this shoe and it´s two successors, the Nike Zoom X Vaporfly Next% and Nike Air Zoom Alphafly Next% suddenly personal bests and world records started to fall. After many of the best performances of all time were achieved in these shoes, people began to believe that Nike´s claim is likely more than just marketing.

Nike shoes made up 25 of the 36 Marathon major podium spots in 2018 and 31 in 2019. The clear differences in these shoes compared to the old school racers are the high stack height, a large amount of foam through the midsole and a carbon fiber plate running through the midsole.

This innovation and success sparked an arms race between shoe companies. Fast forward to today, and after World Athletics clarified what is allowed almost every brand has a carbon fiber shoe comparable to what Nike released in 2017.

Now that there are multiple options, which one should you get? to answer this question we took three of the most recent shoes on the market, the Nike Air Zoom Alphafly NEXT%, the Hoka One One Carbon X SPE, and the Brooks Hyperion Elite, and tested them with are partners at MedBase to get some hard data

Nike´s most recent road racing shoe and the newest version of the shoe that started the Carbon fiber marathon shoe trend is the Alphafly. Eliud Kipchoge famously wore a version of this shoe when he ran the fastest marathon of all time of 1:59:40 in the  INEOS 1:59 Challenge. 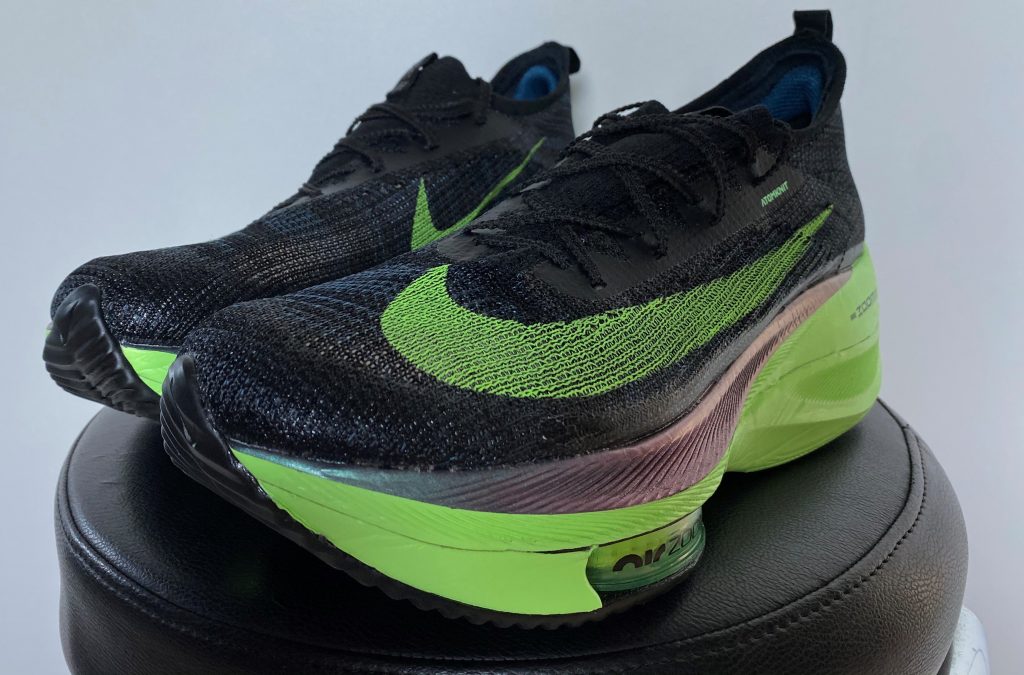 Hoka One One Carbon X SPE

Hoka was the first real brand outside of Nike to release a carbon fiber marathon racing shoe with the Carbon X. The 50 mile world record was ran in this shoe by American ultra runner Jim Walmsley  along with many other impressive times. The Hoka One One Carbon X SPE is the most recent version of this shoe from 2020 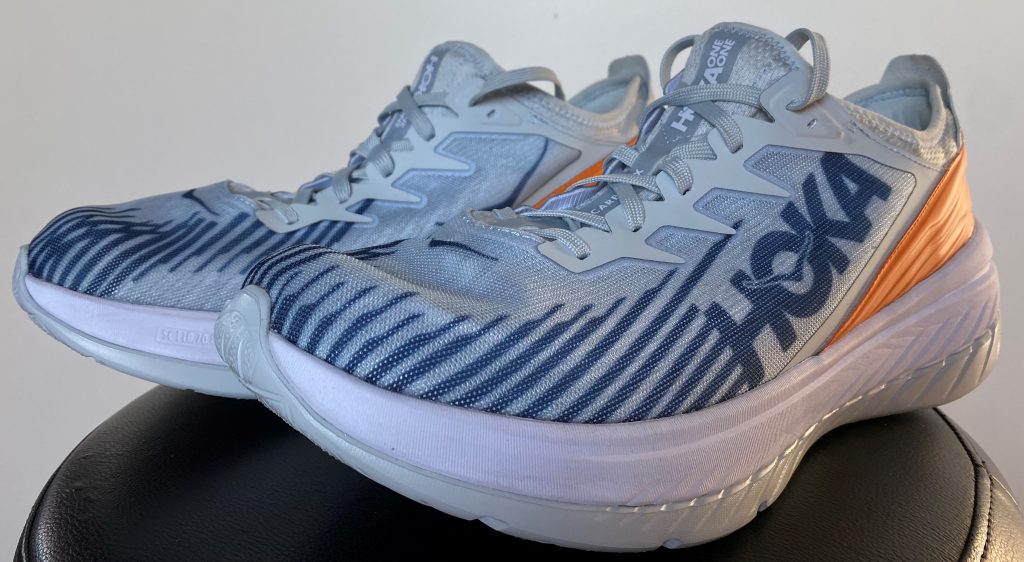 Another one of the first carbon fiber racing shoes released to compete with Nike. This shoe was able to claim some of the marathon major podium spots that were not occupied by the Nike shoe including a victory at the Boston Marathon in 2018 by Desiree Linden in the first prototype. 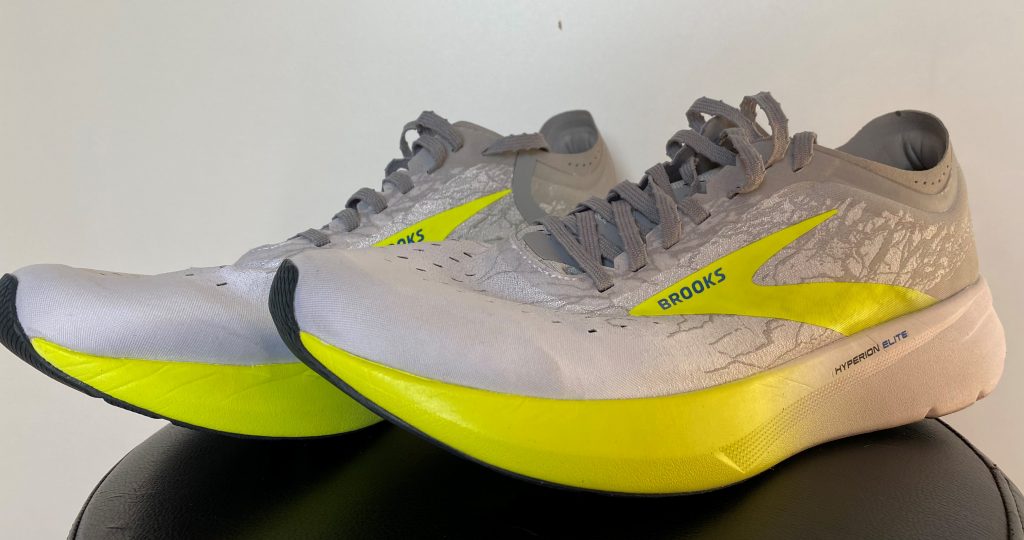 We tested along with this shoe to have a comparison with something that is not a race shoe.

We preformed our tests at Medbase Sports Medical Center Zürich on a HP Cosmos Quasar treadmill set at a 1% incline to most accurately mimic running outside. We measured Oxygen uptake with a Cortex Metalyzer 3B and heart rate with a polar heart rate monitor.

While collecting data we ran in the 4 different shoes listed above at three different speeds as follows:

I was the runner preforming these tests and 3:20, 3:10 and 3:00/km are approximately  marathon, half marathon and 10km paces for me currently. It is important to note that this test was preformed with only one test subject and there are the results will vary significantly with different runners.

in the testing it was clear that the Alphfly preformed significantly better than the other shoes tested.

The oxygen required while running is directly correlated with a good aerobic performance while running. During the test we measured oxygen uptake throughout the duration of the running but for the data in charts and graphs below we only used the last 3:30 seconds for the 6 minute reps and the last 2 minutes for the 4 minute reps. The results were as follows:

You can see clearly that in our tests it took less oxygen to tun in the Alphafly at every pace. when I was running I could really feel the difference an the data shows it is in fact significant. The percentage variance changed slightly at different speeds but the Alphfly was consistently better.

what is really surprising is how much better the Alphafly preformed. the O2 uptake at 3:00 was comparable to that of the other shoes at 3:20 ad you can see in the chart below: 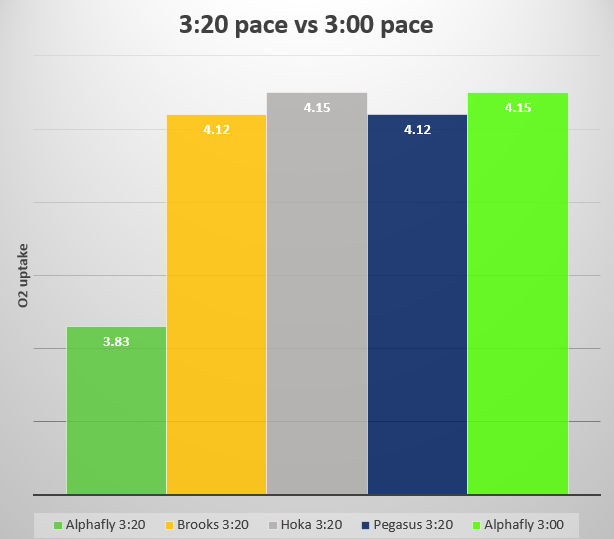 This is by far the most significant finding. It is also worth noting that while the Hoka was the worst shoe at 3:20/km, it was much closer to the Alphafly and significantly better than the brooks at faster speeds. 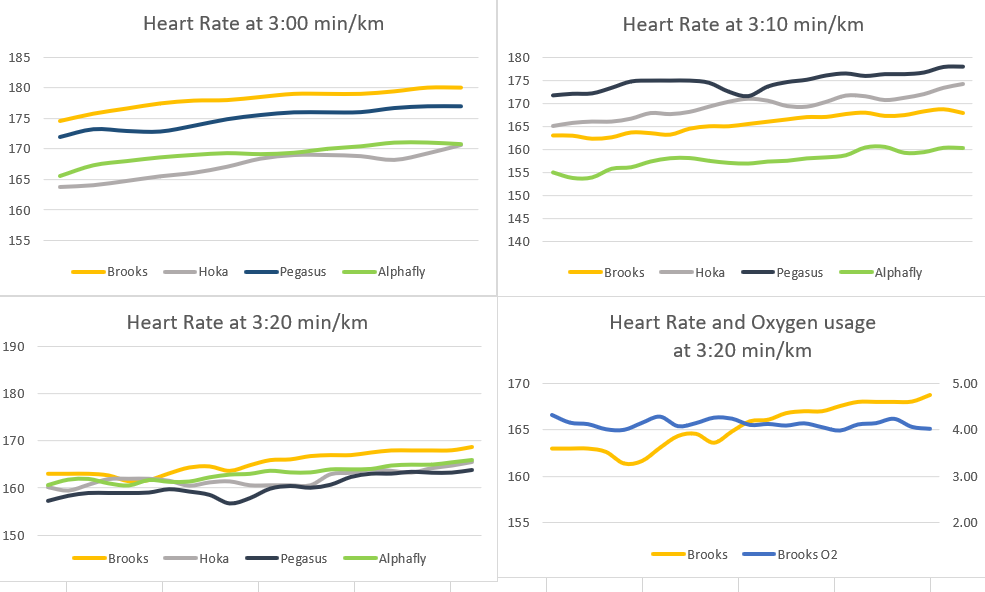 The first shoe in the set was always the lowest heart rate and then it was higher for each of the next shoes tested with exception for the Alphafly at 3:20. If you look closely it does appear that the Alphafly may be a little better than the other shoes, but it is not as clear nor as good of a measurement as the oxygen uptake. Despite the raising heart rate as time went on oxygen uptake stayed more or less consistent as you can see in the final graph above.

Full results of the test written by or partners at medbase can be found here.

As noted before the testing procedure has a major fault as it is just one runner and there are too many variables to take a 1:1 translation of these results to other runners. however, the results of the test are significant enough to say that wearing the Alphfly in comparison to these other racing flats will improve your performance.

The results showed that the Alphfly was at 10km pace (3:00/km) was comparable to the other shoes at marathon pace (3:20/km). You can not simply extrapolate this to the full race and say, “I will be 3 minute 20 seconds faster in a 10km” or “I will be 14 minutes faster in the marathon”. However there is a direct correlation with oxygen uptake and performance so you can say with confidence, “I will be faster road racing in the Alphafly”.

Now the Alphafly is the most expensive of all of the shoes tested but, depending on your goals, it may be worth it. It is certainly worth it for me and I will be doing my road racing in this shoe until something new happens.